I have got quite a bit of goodness to share!  We are in the second week of the Fall One Room Challenge and have we ever been busy.  I’m talking a whole lotta changes and it’s making me all giddy excited, happy dancing as I sit with my feet two steppin, to share with you!

Here’s the before.  Medium gray paint on the walls and the awful builder brown on the ceiling.  As I shared in the first week’s post (click here for the full design plan!) the mural is staying.  I can’t part with it I love it so much.

Here’s another angle of the before paint sitch. How blah amiright?! And lemme tell ya, I have hated the brown ceiling for as long as we have been in this house and it’s been awhile.

First things first we painted all the walls (minus the small sections next to the mural) a lovely off white shade.  It’s Sherwin Williams Alabaster.  I always said I would never paint a room white, well I went and did it. hahaha

Here’s my youngest who just HAD to help paint.  I told him to go throw some paint clothes on and he came down wearing this outfit.  Painting ready! (All electrical was turned off during the painting process, safety first!)

In the shot below is the after of all the walls and the outlying ceiling painted Alabaster (SW).  It really brightens things up without competing with the mural.  That is why I went with white in here.  Not because I didn’t want a color but because I really wanted the mural to stay the star with some serious pop eye candy elements that went along with it.  If I painted the walls a color it would be competing.

And here’s that same window wall shot to show you the difference in the brightness in here! Especially when you see the original color on the right.  Huge change for the better.

Now I am super excited about this shot.  I wanted to go bold on the ceiling.  As mentioned earlier this ceiling has been a sore spot for me for around 7 years now and I HAD to do something with it.  So mama was goin big. I matched up the deep blue in the mural on the upper right corner to Benjamin Moore’s Gentleman’s Gray.  It’s a beautiful deep blue.  We painted the entire ceiling! 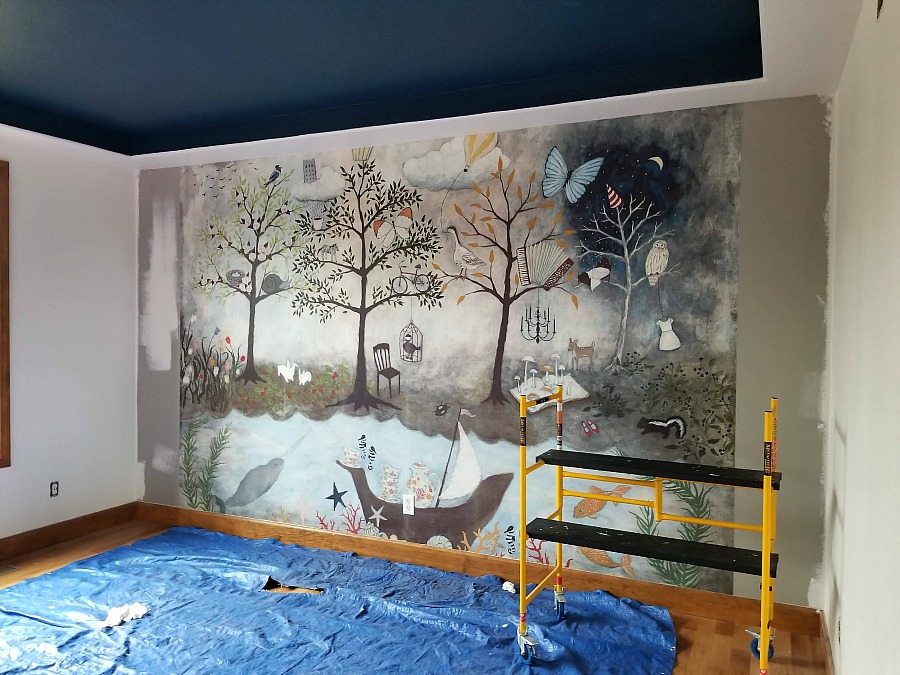 I mean hello there ceiling! Instead of eww don’t look up.

But wait, I wasn’t done yet!  I left the sides of the mural empty for a reason and it looked a little somethin like this.

It’s Devine Textured Brick in White Peel and Stick wallpaper from Target!  $34.99 a roll and it totally looks real you guys.

Here my hubs held up the first piece so I could snap a pic.  And then I climbed up there and hung the whole thing myself! I lined it up with the ceiling and the edge of the mural and ran a giant squeegee over the paper and into the corner.

Here it is flattened out with the squeegee thingy and it worked like a charm. The only thing my husband did was peel the backing the rest was me!  I was so surprised how easy it was to work with.  And I’m not a big faux fan but this stuff is awesome.

I didn’t fully smooth the paper on the other side of the corner.  Once I got the entire floor to ceiling piece in place I ran along the corner with a sharp utility knife and used the natural corner of the wall as a guide to cut the strip. I also ran the knife along the baseboard after tightly wedging the paper into it to get a perfect fit. Repeat on the other side. The entire 2 strips was one roll of wallpaper and took maybe 15 minutes to complete.

And voila!  I wanted the illusion that the mural was painted on a brick wall.  And it doubles as a pretty frame finishing it off nicely. Double win!

Doesn’t it act as a great frame?!

And I’ve got ONE more small but major impact project to share.  And it’s on that ceiling. And it’s called Stikwood.  Yep you read that right. I had some Minimalist Fir left over from our big wall project (here) as I never throw away good materials.  Perfect opportunity to highlight the ceiling even further.

We measured and identified where the wood was going to go and did some fancy math (that was all my husband’s doing so I can’t help with that one) and began our square. We used full 4 ft boards as the exterior row of the square.

Here are my hubs and son trying to get the placement just right and perfectly straight.  I was taking pics and eyeballing from below and handing up levels.

Here is the full outer square after getting all the pieces up and straight!

Then I hopped my booty up there and filled in the rest of the pieces with my hubs cutting them for me.  We work pretty great as a team.  Truth, I have made him help me with enough projects, we figured out a great rhythm a long time ago. He secretly loves it! hehe

And here is the finished square pre-chandelier re-install.

Here’s Bogey supervising and getting covered in strips, he’s making sure we do a good job, aka quality control!

I am re-using my chandelier I already had, it saves money and I still love it.  A little glam always works!

I think my favorite change so far is the ceiling!  That blue makes the perfect statement without competing with the mural, and the Stikwood highlights the chandelier and gives it a beautiful base.  I can’t stop looking up.

Sorry about the crap lighting, but this was late at night right after we finished getting the chandelier installed so there was no light to be had other than the chandy. But you can see all of the changes, from the alabaster white to the brick peel and stick to the gentleman’s gray ceiling and stikwood.

This consisted of a whole bunch of small and easy projects.  The longest project was painting the walls.  A couple of days and we have already completely transformed this entire space!

I have some seriously fun DIY’s coming up including a live edge desk with custom legs (for less than $400), 2 extra large glass sliding doors for $100 each, some epic furniture pieces with a quick and easy modern update (2 sofas less than $100 oh yeah) and an epic reveal I know will knock your socks off.

Whew, lots more upcoming folks!  Stay tuned to see what I have up my sleeve for next week.  I am having so much fun with this!

What’s your favorite part of the transformation so far?  I always love to hear from ya so hit me up in the comments below!

And don’t forget to check out what my fellow ORC participants are up to here!