We are halfway through this awesome challenge and I’m so excited with the way it’s all coming together! You can check out the previous weeks progress so far here week 1, week 2, week 3.  On the agenda for today I’m sharing an idea I had for this office/classroom space which was a long narrow desk.  But not just ANY desk.  I wanted something whimsical, full of character, visually clean and efficient.

That’s a tall order!  Especially since I needed to accommodate 2 computers and 3-5 people at it at any one time.  It also needed to be narrow enough to not hang over into the space too much.  (This room is almost a perfect square at 13’9 x 13’4.) I wanted to place it along the wall with the window and not block the window with the computers so length was important. That left me with an incredibly difficult to find measurement of 8 ft by 30 inch desk.  No go my good peeps.

It was also very important that it added to the aesthetic of the greenery wall, not take away from it and given the fact I have so many little legs underneath a simple base was a must.

Now you see my dilemma!  The things I needed in this desk were either impossible to find or WAY too expensive.  So I came up with a DIY idea.  I’ll spare you the different things I kicked around and get to what I actually landed on.

I had been semi-stalking this antique set of store front doors at a local flea market.  They had been there forever and when I was wandering through getting inspo I stopped and actually measured them.  Wouldn’t you know that one was 9 ft by 29 inches!!  They were waiting for me and this project!  I only bought one (which almost killed me) because I didn’t have space for both and thankfully the seller was good with that.

I already knew we would be suspending it from the ceiling and placing a sheet of glass on the top.  I don’t need no stinkin base! (says me with every finger and toe crossed that I wasn’t a total nutball with this idea)

So now that we had the materials, it was time to get to work!

Here’s what we used:

Custom cut sheet of glass *from a local glass shop…WAY cheaper than the big box blue and orange stores!

We took a stud finder and went along the ceiling to locate the studs.  Marking each side of every stud with a pencil as we went.  They weren’t exactly even on either side of the window but pretty close.

After that we measured, based on the size of the door, where the eye hooks would be located from the wall on the studs and marked.

Once marked we screwed the eye hooks into the joists on those marks.

I knew I wanted it to hang 30 inches from the floor (standard table height) so we cut the rope and tied it to the eye hooks leaving more than enough length to adjust for the 30″ height.  I should mention the door is SOLID.  Well built and heavy.  I actually made the hubs hang on each rope before getting to the door part just to be sure it wasn’t goin anywhere.

Next up, we brought the door in and as I didn’t want to add any unnecessary holes to it I opted to attach the eye hooks on the sides instead of the top.  We used 2 holes from where the hinges were previously located to place eye hooks. Then using a straight edge went directly across the door and made 2 holes opposite the others placing eye hooks.

Next up was tying the rope on the eye hooks attached to the door and getting it level.  We discovered that the 2 acrylic arm chairs I had were the exact height needed to make the top 30 inches.  So we rested the door on the 2 chairs, set a level on top of it to make sure it was perfect, threaded the rope through the eye holes and tied a couple of substantial knots. We needed to make a few adjustments as we went, retying and tightening a smidge (this required my son and I to lift and hold it, envision “Lift!  Lift!!” “I AM!!”) but overall the chairs gave us a great guide. 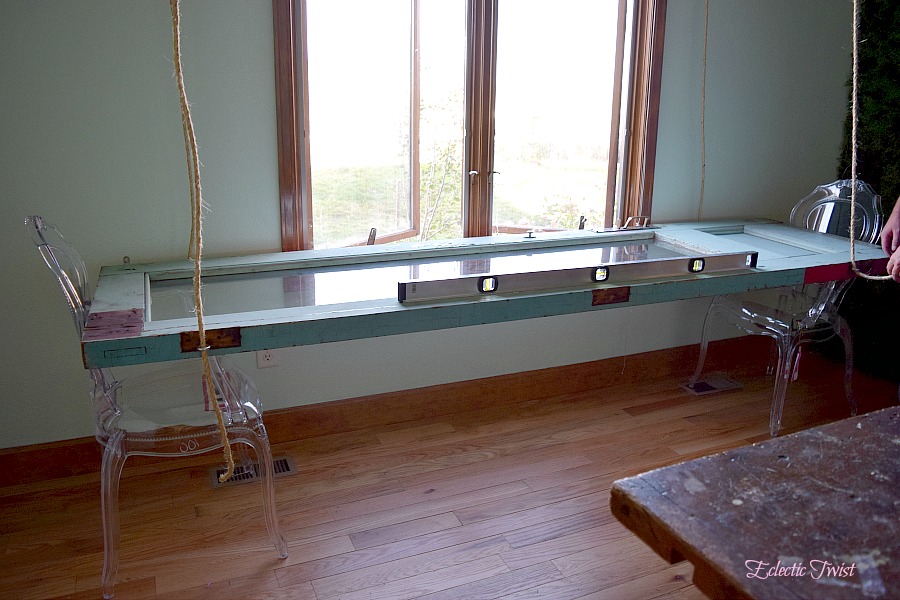 Once all was said and done it was time to place the glass top on it, which caused us to hold our breath moving it from the car into here.  You could see it flex in the middle if we didn’t hold it nicely both in the middle and the edges.  Eeek!! We were almost white from not breathing, I swear.  Whew!  Annnnd we have a desk!  Perfect fit!! (storage is no issue, I have that covered with built in shelving and drawer totes in the closet)  It covers all the bases I needed while still being it’s own unique piece.   If I ever decide to change it I will have a super cool old door I can use as a conversation piece too, so it’s not just a desk. 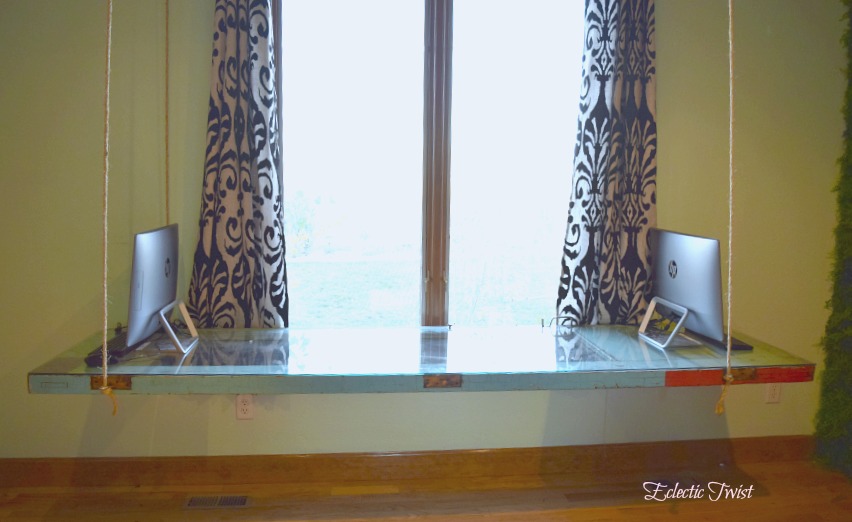 And I can’t wait to share what I did to the glass window part of it (that’s coming up in in the reveal of week 7 but week 6 I will have some sneak peek shots!) 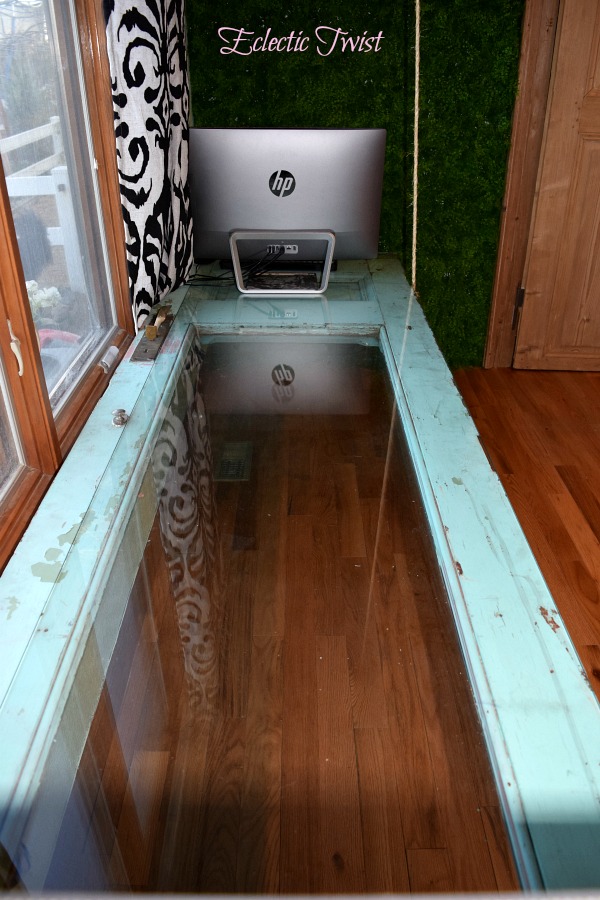 Those ropes aren’t goin anywhere! And I love the character it has, I didn’t touch anything.  I even kept all of the original hardware and had the glass cut to rest just inside of it.

I’m SO happy with the way it turned out and even though it’s suspended we haven’t had any problems with it swinging or moving.  I think it helps that it’s up against the wall, if it was in the middle that would have been more of a concern for sure.  If movement does become an issue we can always come back and anchor it to the wall underneath using L brackets, but I really would rather not put more holes in it! 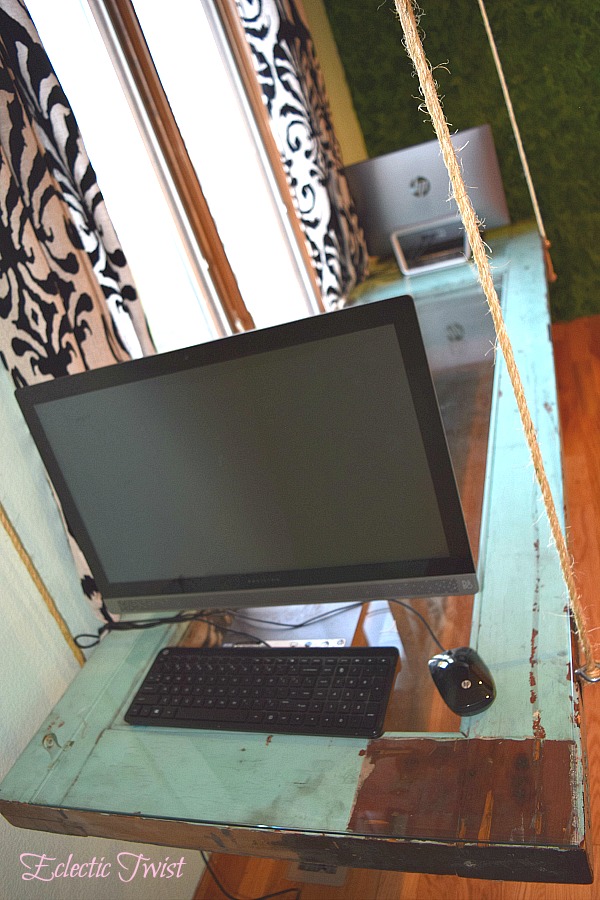 Next week I’ve got another DIY project of a paper “chandelier” done on the cheap!

Have you made your own desk? Did you use reclaimed or re-purposed materials?  Let me know in the comments,  I love to hear all about your ideas too!

And don’t fo’get to hit up Mr Subscribe oe’r yonder so you don’t miss a SINGLE thing!  It only sends excerpts of blog posts when they go up right to your inbox!!

And definitely go and check out what the featured designers have been up to here and my fellow guest participants here!