I recently shared a master bedroom update with ya but here’s an update to the update!  At the time I wrote up that post I didn’t think we would be undertaking a project (even though it had been on the brain for quite some time).  Revamping the ceiling!!  If you notice in the before pics I intentionally try to get as little of the ceiling in the shots as possible, why?  Because it was ugly, as in really fugly. 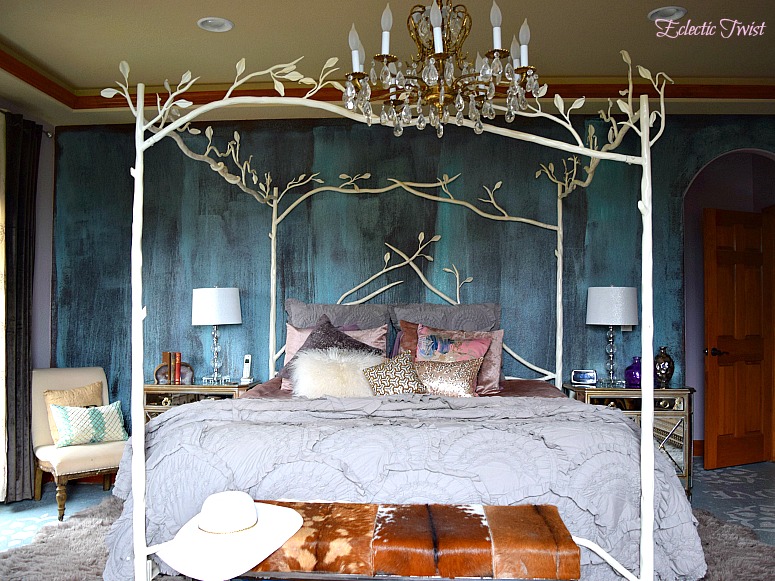 The lowdown…..it’s a great tray ceiling and for me trays are just BEGGING for some special treatment.  A blatant shoutout for a “notice me” application to highlight the architectural/design feature.  For the last 6 years I’ve stared at that thing, equal parts hating it and debating what I wanted to do to it.  I thought about various types of paint treatments from faux, to stencil to a bright color, wallpaper to wood.  I just couldn’t make up my mind.  When we did the metallic effects wall behind the bed last fall it narrowed the choices down.  And then when I was designing the Mom’s Oasis room this spring I decided to do the wood there as a trial run for the master bedroom.  See how the process went, did we love it, etc.  Happy to report that we absolutely loved the results and so the decision was made to do it on the master bedroom ceiling!

Here’s how it turned out in the Mom’s Oasis teensy room!

And then time passes……vacations, sports, summer activities, you know the drill.  And the whole thing fell to the backburner.  Until the hubs had a 3 day weekend due to a scheduling change and we were left unexpectedly with some time to actually DO something!  So on a whim we’re like “let’s rock out that ceiling!”  It’s funny, we talk about what projects we want to get done but don’t actually plan out when we’re going to do them.  It’s more like, hey nothing happenin this weekend so let’s knock out x.  We are more fly by the seat of our pants type of peeps, keeps things interesting.

2 of my 4 being big helpers with our massive haul

Alas, off to the depot (of the home variety) we go and purchased 27 boxes of weathered wall boards by Weaber lumber and a couple boxes of nails.  Our 4 kids in tow were SO thrilled. This is the same wood we used in the Mom’s Oasis.  Why did we choose it?  You absolutely can’t beat the price at $2.38 a sq ft it’s the cheapest you can find.  We liked the variety of colors and that it was a real wood product.  And buying it at the depot, you can find it anywhere!

One other item we purchased was a 4 ft high rolling scaffolding shelf (this was at the blue store).  We planned to rent one set again but decided we seem to need it so often might as well just buy one!  (This made the install process 100x easier!)

Once we arrived home, we again enlisted the assistance of said 4 thrilled children and hauled all 27 boxes into the house and lined them up in the hallway right outside the bedroom door.  Turned on some jammin 90’s to today tunes and proceeded on this diy adventure.  First up, we cleaned the room by removing the rugs and taking out the smaller items like chairs, side tables and trunk.

Then we set up our handy dandy rolling scaffolding and popped out the lights and smoke detector from the ceiling.  Can lights are super easy, they are just held in place with 2 metal spring like brackets, so you just take a flat bladed screwdriver and shimmy it under the lip of the light and gently pull it down.

Time to start the install!  We opened a handful of boxes at a time and laid them out for ease to pick what color boards we wanted to use.  We didn’t have a pattern but wanted to vary the colors.  Each box comes with shades varying from very dark to light.

Starting from one corner we held the board up nailed the end of the board at a slight angle (no stud there) to help cinch it to the ceiling and then nailed where the chalk line marked the studs.  Roll over and install the next same way.

I can’t highlight enough how much easier this process was with the rolling scaffolding.  It saved SO much time from having to go up and down a ladder.  We simply kept the nail gun on the scaffolding next to where we were standing and rolled back and forth.  We rotated between the 2 of us, one was up nailing in place while the other cut the pieces and got the boards. (you might notice you don’t see me in any of these pics there are 2 reasons for that 1. I had 4 day old unwashed dirtay hair, with the grubbiest project clothes you’ve eva seen and NOBODY needs to see that and 2. The hubs doesn’t think to take pics anyway, so we get shots when we switch jobs and I snap a few in between my duties)

I just had to share, that’s my epic cutting skills on display right there.  A lil pat on my back for that one!

The most time consuming portion was cutting out all the lights, speakers and smoke detector.  We had in total 8 holes in the ceiling to cut around.  Our method was super scientific……person on the scaffold would hold the board in place put their hand in the hole with a pencil and trace the outline onto the board.  Other person would take the board and using a jigsaw cut along the trace line.  We didn’t have a hole saw big enough for these which is where the jig saw came in handy.  And we used a circular saw to make the straight cuts.  Epic genius amiright?!  Totally kidding folks, to be honest we were far to lazy to develop another method and this worked pretty darn well.  Our only hangup was the board between one speaker hole and the center ceiling chandy.  That board was going to line up on both so we had to cut it in 2 areas.  We didn’t get it quite right the first time but the second board, came out like a charm.

This is a 3/4 progress done shot

When we got to the end we had a 1 1/2-2 1/2 inch gap left (due to the variation in the wood across the ceiling) so we took 2 boards and ripped them down to 1 1/2 inch widths using a table saw.  We were able to fit them tightly into the gaps and nail them place.

Done!  The crown trim was already in place beforehand, I had decided to leave it there to give it a finishing touch and we just worked around it.  It did exactly what I hoped it would!

We ended up only using 3/4 of a box of nails and returned the others along with one whole box of weaber lumber.  We used 26 full boxes with small cut pieces left over that I’m planning on using for a small project. So really not much waste at all.  When we encountered a board that was really warped or not straight we set it aside and used it on the ends where the cuts needed to be made.  This allowed us to get the most use out of the boards.

I love it so much more now!  It was like the cherry on the sundae, the icing on the cake, the last piece of the puzzle……although mama thinks I might need a larger chandy in here now.  That one looks kinda puny.  Hmmmmm

If you like what you see here feel free to give the ole blog a follow via the subscribe to the right, no spam or other emails JUST blog post excerpts when they go up!  And don’t forget to find me on instagram (link in sidebar)!!  I’m always posting new pics every single day!

Have a lovely one dearies!  XXOO